Apply now for a quote

Apply now for a quote
MENU

Home > About us > History 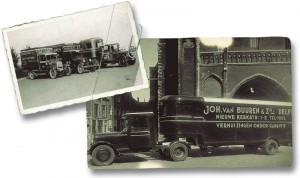 Great-grandfather Johannes van Buuren signed for his first removal in 1905. Using a cart and a horse he moved his first client’s possessions out of the inner city of Delft. Later on he traded his cart and horse for a truck and today, more than 100 years later, the fourth generation van Buuren runs a well-known international removal company. In 1994 father van Buuren leaves the company in the capable hands of brothers John and Chris van Buuren. Van Buuren evolved from a cart and horse company to one of the most renowned removal companies in the Netherlands.

The fourth generation van Buuren relies on a team of highly motivated collaborators and is located in a modern facility in Delft (Lagosweg). The enormous storage facility is big enough to house 850 9m3 containers.

Joh. van Buuren and Son. Removals will remain available to you during the corona crisis. The (planned) removals will continue as usual, of course with due observance of the measures and guidelines from the RIVM (National Institute for Public Health and the Environment) Is there a removal planned soon? Then you can still request a moving offer. Valuations can also still take place in the form of a video appraisal. For questions please don’t hesitate to contact us.

A matter of trust